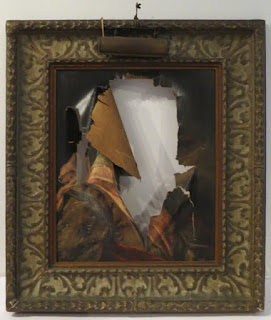 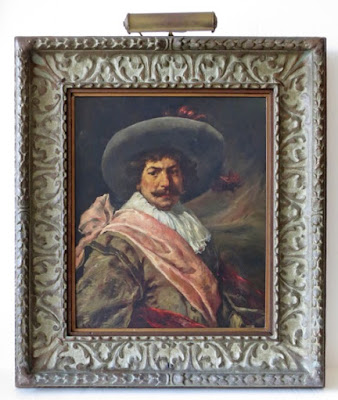 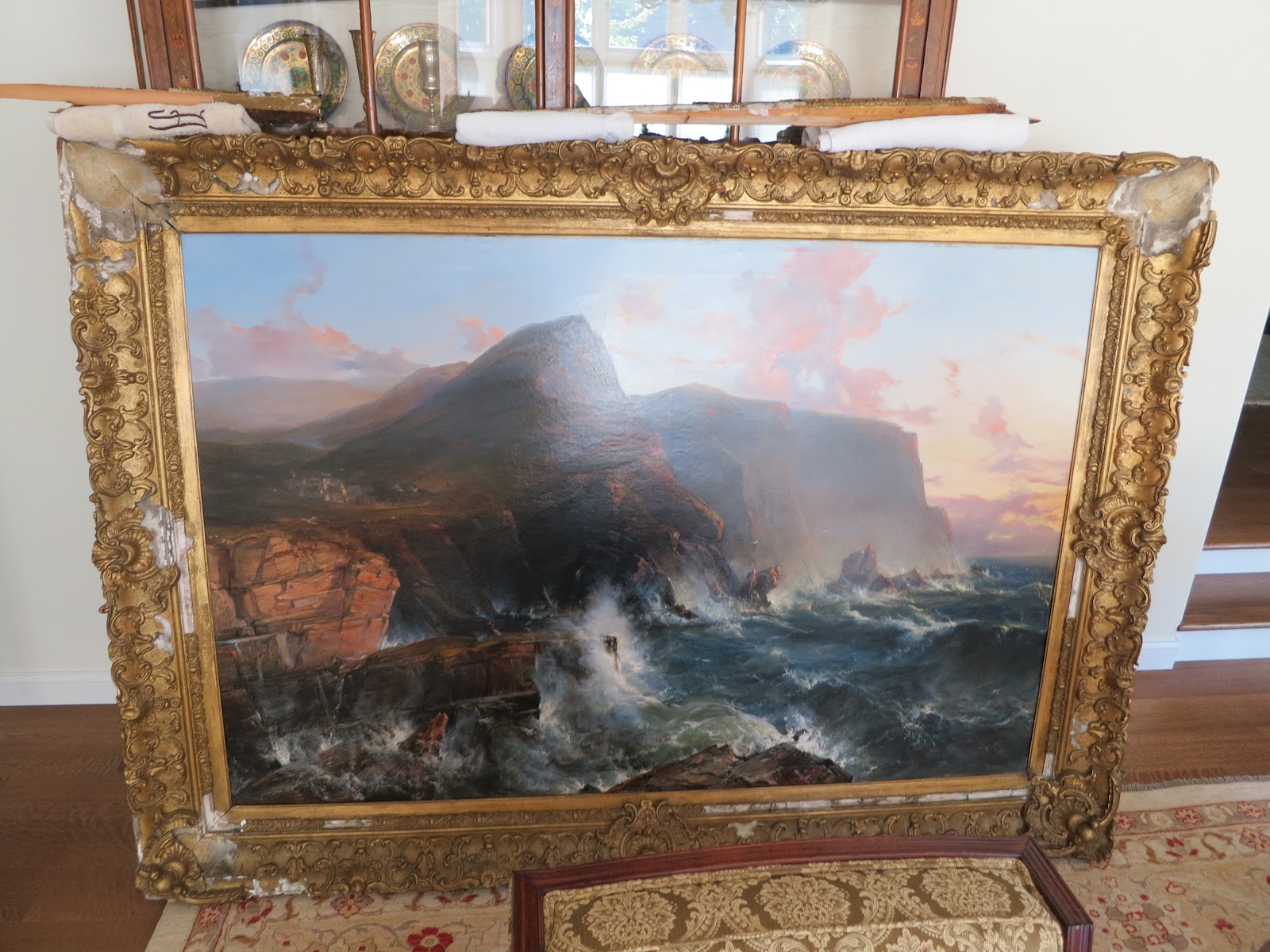 One of the largest and most involved frame restorations we have worked on to date was a 7 ft. by 5 ft. ornate frame. The piece had fallen off the wall and down a flight of stairs. This was an instance where the frame had been fit with inappropriate hanging hardware for it's size and weight. Because of the impact, we ended up with hundreds of individual pieces that had fallen off the face of the frame, as well as parts of the large decorative corner pieces. Luckily, the painting itself was not harmed during this accident.

We began the treatment by re-gluing and stabilizing the corners so that they were ready to be put back together. Although we were able to puzzle in and adhere most of the pieces, there were still a significant amount of smaller pieces that needed to be re-made. All four corners were affected to a degree - some worse than others. Luckily a few of the larger pieces could be salvaged. On top of re-making some of the smaller pieces, the larger pieces were the biggest under taking.

For many small repairs we can sometimes use an oil based polymer clay to make a mold, but this would not be sufficient for such a large repair. In this case, we needed to go one step further and make re-usable silicone molds. Before the mold can be taken, we had to re-make one of the corners so that we could have an accurate shape to replicate.


Making a rubber mold is a more complicated process than taking a clay mold. The mold has 2 parts – silicone and a setting agent. The 2 parts are mixed together and immediately poured and left to set. The finished corner is prepped by creating a buffer to keep the material contained around the shape, as well as sprayed with a quick release spray so the mold, once set, could be easily removed. After every corner and shape was adhered and refined with carving tools, we could start getting the new pieces ready to patina.


To stay consistent with the rest of the frame's finish, we used plaster to make the rest of the corners. Traditionally, when gilding and finishing the patina of a frame, bole (a mixture of a soft clay and rabbit skin glue), is used to prep the surface. Bole can be colored many different ways, but we chose a dark gray to stay consistent with the original patina. The color of the bole underneath ultimately changes the overall look of the top layer of gold when finished. Other traditional colors most seen are terra-cotta and yellow. This whole process was executed over many months, but in the end, we were able to get the frame looking as good as new.
Of course, to make sure the piece was secure, we fixed the back with a french cleat, instead of the two small screw eyes it had originally been installed with. Although very laborious, this was a fun project to see through to the end. After installing the piece back in the client's home we felt assured it would stay put for many years to come!

Posted by Victoria at 5:28 AM No comments: 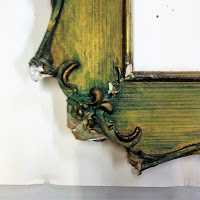 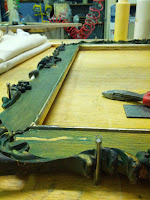 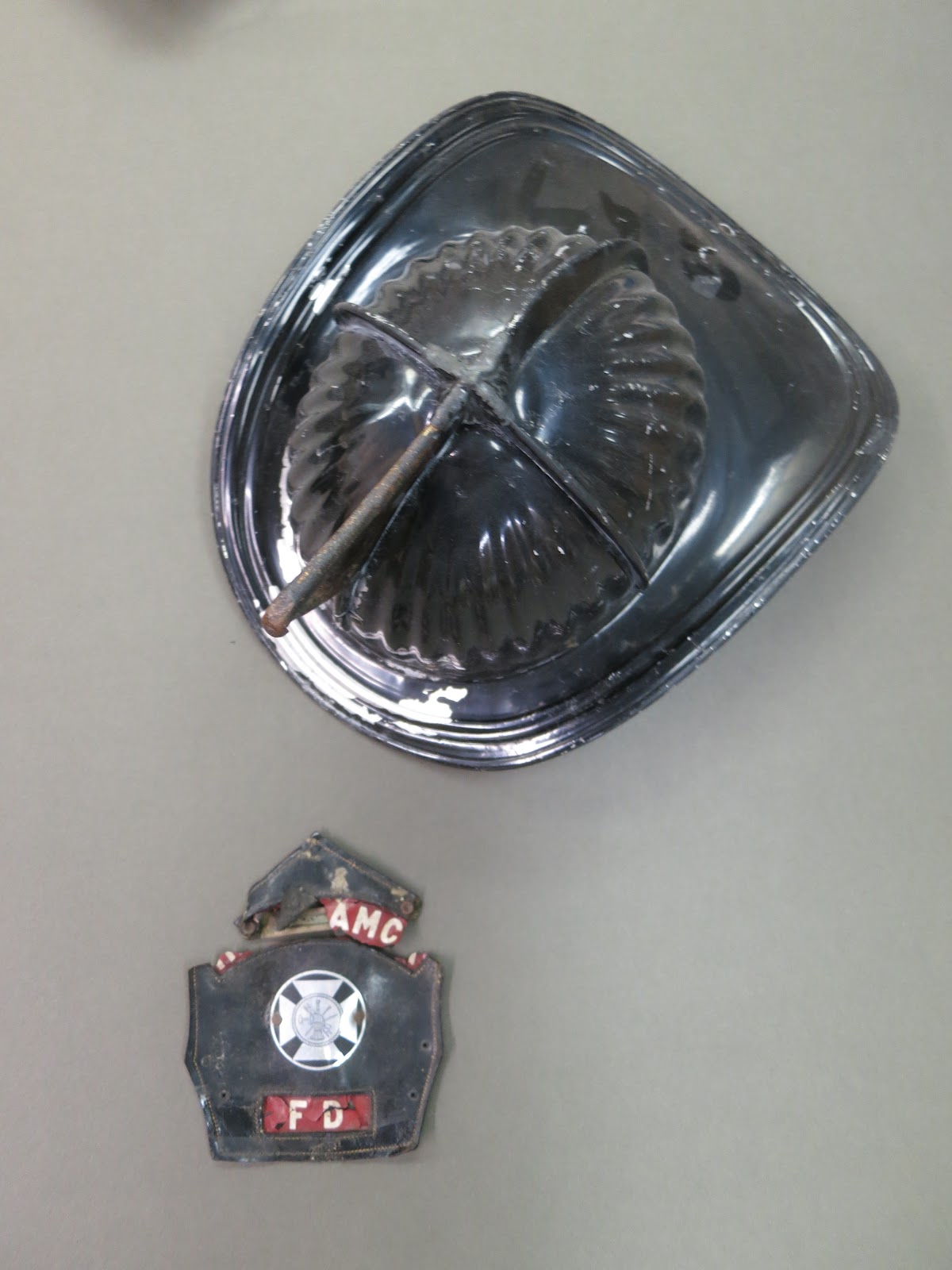 We received this fireman’s helmet in pretty poor condition - ironically it had been in a bad house fire itself. Our client was a local police officer whose grandfather was a fireman in 1960’s Hamtramck, and this piece of family history held high sentimental value.

The helmet itself came to us pretty beat up, but the piece in the worst condition was the badge held up in front by a golden eagle, traditional for helmets in the US at that time. It was in multiple parts, and many of the original pieces were missing, having been lost in the fire. After separating each piece, we were able to begin focusing on individual elements of the helmet for a unique restoration process.

Because the badge had the most issues, and is also the focal point of the helmet, we started treating it immediately. Stabilization* had to occur so that the badge did not deteriorate any further. Because so many pieces had either detached or been lost, the best course of action was to completely re-line the badge onto a new piece of fabric so that the areas of loss could be filled with new material.

We were able to puzzle together the available letters, fill and then in-paint, matching the text and texture of the original wording. This same process was done to the leather badge itself. Once the letters and badge were cleaned and fixed, we put them all together and adhered them to a new fabric backing for added strength and uniformity. Using an archival and reversible glue, we were able to ensure true preservation of the emblem. After mounting, we treated the badge with a leather conditioner to make it more flexible for re-shaping to its original curvature. The metal plate bearing the Fireman's crest was cleaned and riveted back onto the badge.


The helmet itself needed a lot of attention as well. The inside of the helmet was padded with a protective fabric liner that needed to be patched to prevent further deterioration, which was occurring due to previous use as well as age. The fabric was too delicate to properly clean until it was stabilized. After the helmet was cleaned, the major areas of loss were in-painted. Not all areas with paint loss were in-painted so as to conserve the age, history, and its utilitarian past.


With all the unique pieces of artwork and objects that come through our door, it was an amazing opportunity to work on a piece of local history. We are confident that after this process of restoration, the family will be able to enjoy this family heirloom for generations to come. 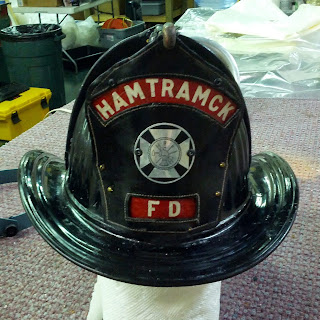 *Stabilization: Addressing the work of art/object so that its present condition does not cause further decline. Creating a stable and secure environment.
Posted by Victoria at 7:27 AM 1 comment: 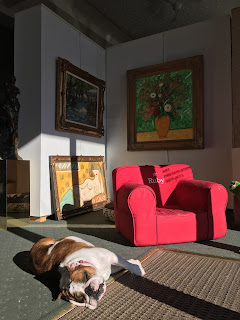 Work in progress
Posted by Art Preservation Services at 4:54 PM No comments: